My mission today is to save Alice from the Wonderland of what some refer to as functional training. I will attempt to rescue dear Alice (aka you all) with the use of chains—kinetic chains, that is. First, I would like to define a few buzzwords to clear the fog that settles in this functional wonderland. 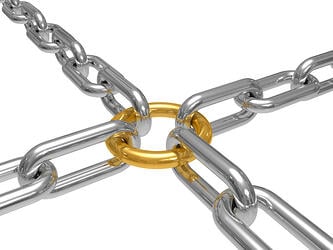 I am sure that most of you have heard the term “functional training.” If you have not, you may still have a poster of Lee Haney hanging in your locker and you are counting the seconds until your next “chest day.” I will be the first to admit that I was that guy. At the time, that is what we knew, but we now know a better way of doing things—a safer, more “functional” way.

But we do not want to throw the baby out with the bath water here. We still see a lot of theory and practice from that time in the evolution of fitness. Unfortunately, if you asked five different people (fitness pros and gym goers alike) you would get five different answers of what functional training really is. If we were to dissect the term, and I think we should, the simplest and most accurate definition of functional training is to train or restore function in movement. There are many ways to go about training or restoring function. We are going to
focus on the concept of using kinetic chains to do so.

Kinetic chain is another term that needs defining. Let’s dissect this term, shall we?

Human movement can be broken down into some basic patterns (a concept that will require a lot of time devoted to in a future piece), and these patterns are linked together in some way. This is a good thing because if you restore function to one pattern, you could be improving an aspect of another pattern.

We look at the body as having two main kinetic chains: anterior (front side of the body) and posterior (back side of the body). These chains will cross, giving birth to another buzz term: the “X Factor.” So when we focus on training these chains of movement, we will arrive at a more functional operating system. Simply put, train the chains and the body moves better and longer.

What Functional Training Is Not

Using the concept of kinetic chains, I have been able to give Alice (you) a sense of direction to navigate through the Functional Wonderland. But I have only scratched the surface. Keep your eyes open for Chapter 2 of our story in a future post, where we will tackle movement patterns and how to train them.

Don’t know how you are moving? Schedule a Functional Movement Screen with us today and start getting the most out of your training.