Flight School: Training to Improve Your Vertical Jump for Sports 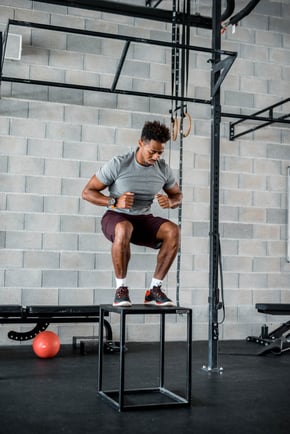 When watching elite athletes during competition, there are many athletic traits and features that we novices or amateurs marvel at. We think to ourselves, “If I did something like that, I wouldn’t walk for a week!” Seeing an NFL running back or wide receiver make a cut at full speed, a baseball player hitting a 400-foot home run, or a powerlifter deadlifting the weight of a Volkswagen Beetle are feats that just leave you in awe.

One of my favorites is to watch the jumping ability that is on display in countless basketball, football, and many other sporting events. Nothing seems to get fans and folks like myself more fired up than to watch an NBA player effortlessly float in the air and dunk on an opponent, or an NFL receiver jump up over two or three defensive players and come down with the football. No doubt, the combination of high-level athletic ability and hard work has paid off for many of these professional athletes with what seems like superhuman abilities. There is a reason that we see these men and women on TV and pay to see them during competition. The capabilities of the human body are crazy!

So, many of you reading this are probably not professional athletes. You might be former high school or college student athletes who have since “retired” from your respective sport. Like many of us, the “athlete” in us never really goes away. We find other sports or competition to feed that drive that we had as we grew up by playing recreational-league sports like basketball, flag football, or soccer, or have picked up new sports such as golf (like this guy) or tennis. And if you’re anything like me, you want to try and continue to improve in your new sport as much as possible.

Regardless of where you are in the timeline of your athletic journey, the vertical jump and vertical power will always play an integral role in your performance. Basketball and volleyball are the most obvious sports that are reliant on these abilities, but golfers, tennis players, and athletes in any other sport that utilizes rotational aspects would benefit highly by increasing their vertical jump. I mean, who wouldn’t want to hit the golf ball farther or add a few more miles per hour on their tennis serve?

When it all comes down to it, the amount of force we can put into the ground will dictate a lot of the athletic actions that happen with our bodies.

Below I break down three different types of jump training styles that will put you on your way to soaring above the competition.

This is the most common type of jump training that you will see. Utilizing only the weight of your body, you perform these plyometric jump movements with little or no equipment. In the video below, you will see three movements starting from easiest to most advanced. These include the following: Now we get into some of the less common vertical jump training options. Resisted jumps add some type of downward-pulling resistance that will make your jump seem more difficult and hopefully help you generate more effort into the movement. The movements in the video below include the following: The third variation is assisted jumps. In my opinion, these are the most enjoyable. The goal here is to feel like there is a trampoline-effect going on where you just seem to spring up into the air. Most (if not all) variations will utilize a band. The three movements I have chosen for you are the following: All in all, the vertical jump is a very important skill to improve and master with regard to overall athletic ability. When it all boils down, the amount of effort you put into the training will dictate the results you get. Doing the majority of your jumps at 50 percent effort will yield an improvement in just that: jumping at 50 percent. Try to maximize your effort with each set and repetition where you are working at or above 90 percent effort, whether that be because of doing lower repetition ranges (1–5 reps) and/or making sure that you are fully recovered between sets (about 1–3 minutes’ rest).

Give great effort, get great results!

This blog was written by Alex Soller, Athletic Performance Coach and NIFS trainer. To find out more about the NIFS bloggers, click here.

Hacks 4 Golf Hacks: Warming Up Before You Tee It Up 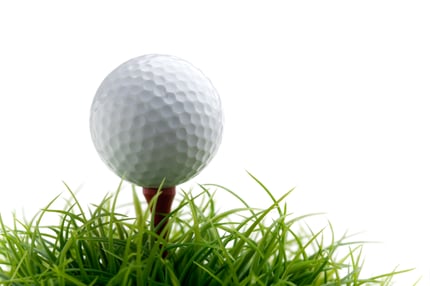 Looking back on the history of my work in the blog world, I have found that every year around this time I tend to write about a sport I sometimes love to hate: golf. So, without further ado, it is time for my yearly “golf blog,” where I share a few insights from a hack’s viewpoint that will hopefully lead to some success in your game. If you play this frustrating yet beautiful game, you know that every round can either be 4 hours of bliss, or contemplating why you spent so much money on those clubs. And maybe that’s what makes the game so special for so many, the never-ending battle between good and evil (thoughts, that is).

Whatever it is that keeps you coming back to the links, obviously you want to play the best you can and as long as you can. The proper warm-up for any type of fitness or performance activity has been spoken and written about by countless fitness pros, yours truly included, but I would argue it’s super important to your game and your health to talk about warming up before you tee it up.

If you are like me, sometimes you get to the course with only a few minutes to spare before your tee time. Here are a few strategies you can implement that don’t take a lot of time and will benefit both your game and your body.

On the Course and in a Hurry

Here are some videos that demonstrate some important warm-ups and drills.

Now, there may be a few things holding you back from completing a proper warm-up before enjoying a great day of the oldest game. You may not show up to the course in time. I make time to get there early to get outside and really begin the round before the first tee. You might feel a little “goofy” going through a proper warm-up in front of your friends. To that I say, “success favors the prepared,” and you can show them drills after you beat them on the course, or are able to play again immediately without soreness, or carry the bag for 18 holes and remain upright. A proper warm-up may not get you on tour, but it may save you a few strokes aside and keep you playing longer.

This blog was written by Tony Maloney, ACSM Certified Exercise Physiologist and Health Fitness Instructor. To find out more about the NIFS bloggers, click here.

Finding Your Lifetime Activity: Staying Active Should Be Fun

We exercise many ways every day, many times unknowingly. Sometimes this is because we actually enjoy doing it and it doesn’t seem like work to us. As the old saying goes, “time flies when you’re having fun.” One requirement for a lifetime activity, though, is that it most often needs to be something you can do from the time you stop wearing diapers until the time you start wearing diapers again. The ideas I like to explore can include fitness, but also non-exercise–based activities.

Is Tackle Football a Lifetime Sport?

Rarely, if ever, do you hear about a 60-plus person excelling at tackle football, yet it is still one of the most celebrated and promoted sports in the world. That sport in particular has plenty of fitness-related benefits, ranging from strength training to teamwork; but on the flip side, not many people play tackle football outside of peewee football after they graduate from high school.

You might argue that there are people who play in college and professionally, or that there are adult flag football leagues. But the reality is that the percentage of participation is relatively low. This poses an issue, so you need to strive for activities that provide exercise for the long haul.

Some Appropriate Sports and Activities

Many sports can be considered lifetime activities. These include tennis (or any variation: badminton, table tennis, racquetball, and so on), golf, and swimming. 5K races and mini-marathons are also in this category and are well attended by all age groups, with many older competitors able to complete and compete among others in their age group.

The question may arise, “What if I don’t care for sports? What am I going to do?” You might already have it covered if you participate in any of these activities:

There are many ways to track the estimated calories burned for these types of exercises through the www.myfitnesspal.com website. Take one weekend and track every step you take with a pedometer and note all activity. You might surprise yourself with how much you actually do.

Circling back to the original idea of pushing lifetime activities, it only makes sense to start early with children. Educate youth about health and fitness and why it’s important to give attention to lifetime activities and planning for a healthy and full life of fitness.

There Is No Age Limit on Healthy Living

Beyond the kids, you’re never too old to aspire to being healthier. Meeting with a fitness coach can provide a spark: they can help you assess where you are starting, what your strengths are, and possible avenues for participation you might never have known existed.

Finally, if you are looking outside of fitness and sports, don’t search too hard because you might have already found something that you can benefit from without realizing it. As personal trainer, author, and entrepreneur Martin Rooney says, “Doing something is better than doing nothing.” You can take it one day at a time and tell yourself that doing something is better than nothing at all. If you believe you can become a better you every day, one day you will.