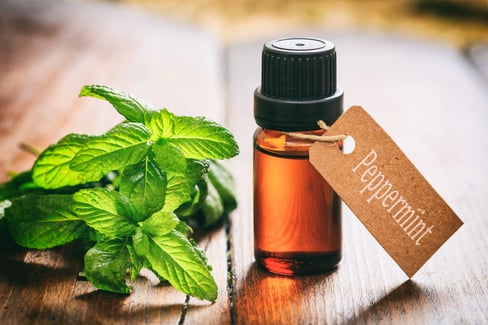 Peppermint oil is a commonly used nutrition remedy for Irritable Bowel Syndrome (IBS), other digestive problems (abdominal pain), the common cold, and headaches. We will focus on gut health in this blog. This remedy has been mentioned in records from ancient Greece, Rome, and Egypt and is becoming more popular in the modern age.

It is suggested that peppermint oil in enteric-coated capsules may improve IBS-related symptoms, such as abdominal pain. A meta-analysis evaluated 726 patients across nine studies, all of which were assessing the use of peppermint oil for treatment of IBS. All the studies showed a significant improvement in IBS symptoms and abdominal pain. The only adverse effect commonly noted was heartburn. Furthermore, another study was done where 65 IBS patients completed the study. There was a placebo group and a group treated with peppermint oil. Over the course of six weeks, those taking peppermint oil said abdominal pain (upset stomach, bloating, and gas) markedly improved, whereas the placebo group saw no significant changes. No other IBS symptoms improved. Two weeks after trials ended, the pain score increased back to the normal (same report as prior to treatment).

According to the literature, the most common drug interaction is enteric-coated peppermint oil capsules taken at the same time as antacids. It is suggested that the two not be taken together, because the enteric coating will be broken down too quickly, which can result in heartburn.

Much of the research done to prove peppermint oil helps with IBS was short term. Not many studies have looked into the long-term effects and safety of supplementing peppermint oil. Thus, I believe future research should look into that.