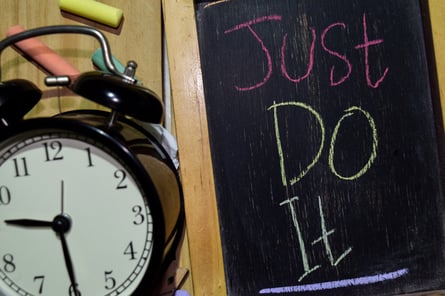 We’ve all been there, right? You’ve chosen a new habit that you want to form: go to the gym four times a week, choose one day a week to grocery shop and meal prep, maybe start work on that side hustle you’ve been meaning to do for years. You’re all in, gung-ho for about five days, and before you know it, you’ve fallen back into the same routine as before. That bright flame that once was your motivation has faded into the background. Now what?

Relying too much on willpower or waiting for motivation to strike is one of the biggest pitfalls when it comes to habit formation, or just keeping up with the craziness of each day’s to-do list. Motivation is fleeting. It comes and goes just like the wind. But there is one trick you can use to help breathe some life into your willpower: The Do-Something Principle.

Like the name implies, by taking one small, actionable step, you can help elicit some feelings of accomplishment and inspiration to push you ahead. I loved the way Mark Manson described it: “Action isn’t just the effect of motivation; it’s also the cause of it.” (Read more about Mark here—but be advised that his writing includes expletives.) And it’s him I credit for the Do-Something Principle.

Action Leads to Inspiration, and More

Too many times we think that the order of the operations is inspiration, followed by motivation, which then leads to action. But this rarely happens. And if it does, it’s usually short-lived at best. Sometimes just accomplishing a small task, like saying “I will put my gym shoes on,” can lead to the next step of “Well, I might as well go outside if my shoes are on,” and before you know it you’re out taking a walk and being physically active.

This logic can be applied to other facets of life as well. Say it’s a project at work, like a report you have to write. You know it’s been on your to-do list for a few days, but instead of tackling it you’ve been spending time looking at email or getting sidetracked by other menial tasks. Maybe you’ve even felt a mental roadblock when it comes to that report. This is exactly where you can use the Do-Something Principle. Even just sitting down, opening Microsoft Word on your computer, and throwing a few thoughts down on the page can help spur you on to complete that report.

Anecdotally, when I personally feel like the mountain of tasks in front of me seems a tad overwhelming, saying “Just do something” as a mantra works to keep me grounded. I choose the most important of what’s in front of me and literally just do something to work toward completing that task. I think Brad Stulberg, author and performance coach, described it concisely in saying “Show up. Mood follows action. Just get started. Because it’s really as simple and hard as that.”

Find Motivation Through a First Step

So whatever tasks might lie ahead for you, if you’re having any difficulty getting started or feel a bit of resistance, give the Do-Something Principle a try. Sometimes it’s literally just a matter of taking that first step, even if you aren’t 100% sure of what that step even is. Regardless, Nike wasn’t too far off when they said, “Just Do It.”