Holidays are times when you can relax and reflect, spend time with friends and family, and indulge in copious amounts of turkey, ham, mashed potatoes, and pie. Well, maybe don’t eat so much pie. But we do have plenty of reasons to not only be grateful, and to be inspired for the future.

Top Ten Things That Inspire Me

You probably have a hundred things you are excited about for the next decade. I have compiled my personal Thomas’s Top Ten list of things I am inspired by and that make me smile.

What ideas are on your Top Ten list? I’m sure there are many I have failed to list that are as important or possibly more important than the ones I have listed. Take a few moments and jot them on a piece of paper. That’s how I started this blog!

Looking forward to a New Year and new decade is an exciting prospect. NIFS will be looking help you reach your goals, motivate you, and educate you with the most knowledgeable and expert advice available. Happy holidays and have a GREAT 2020.

The Impact of Exercise on Chronic Disease

Has a physician or other healthcare provider recently told you to improve your diet and exercise? If you are like most Americans, there is also a pretty good chance that you have a stressful lifestyle that leaves you short on the time, money, and energy it takes to implement these changes. Besides, other than a few extra pounds, you haven’t really noticed any changes to your body, right?

I’m here to tell you that your body is changing, and the quicker you make a change, the better.

Are You at Risk for Chronic Disease?

In 2017, the Centers for Disease Control and Prevention (CDC) released data on deaths and mortality. The 15 leading causes of death included several chronic diseases that are defined by the CDC as, “Conditions that last 1 year or more and require ongoing medical attention or limit activities of daily living or both.” Those on the list included the following:

Combined, these diseases accounted for 41.5% of deaths in 2017. When other chronic and mental health conditions are added in, they account for a staggering 90 percent of annual health care costs. The one thing these conditions have in common? They can all be treated with proper nutrition and physical activity.

Individuals who participate in key risk behaviors like tobacco use, poor nutrition, excessive alcohol consumption, and lack of physical activity or more likely to develop these diseases. In some cases, we have no control over whether we develop these diseases, but we can mitigate the risk by eating healthier and participating in more physical activity.

How to Make the Change Toward Healthy Living

If you are interested in making a change, first get screened by a licensed healthcare professional to discuss your current lifestyle as well as your personal and family medical history. It is important that you speak with a doctor prior to engaging in any exercise program. In addition, I recommend consulting with a Registered Dietitian (RD) to discuss your personal dietary needs.

Finally, join me through this monthly blog mini-series, The Impact of Exercise on Chronic Disease, as I detail how exercise improves the quality of life for individuals with a major chronic disease.

This blog was written by Brandon Wind, ACSM Certified Exercise Physiologist and Healthy Lifestyle Coordinator. To find out more about the NIFS bloggers, click here.

Yoga: What Is It, and How Do I Choose the Right Class? 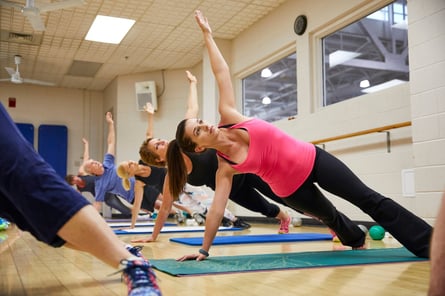 Yoga is pretty popular, and not just in the fitness industry. It’s getting lots of press for its ability to aid in living a generally healthy lifestyle. When people hear about healthy living, they often associate that only with exercise, and sometimes neglect the importance of a balanced diet and de-stressing techniques. Studies are now showing that it’s important to balance out all areas of life; not just one part should have dominance.

By definition, yoga is a Hindu spiritual and ascetic discipline, a part of which, including breath control, simple meditation, and the adoption of specific bodily postures, is widely practiced for health and relaxation. Yoga was developed in India up to 5,000 years ago as a comprehensive system for well-being to balance the body physically, mentally, emotionally, and spiritually. Contrary to common thinking, yoga is not a belief system but a guidance technique to enrich living and aid in attaining goals.

There are many types of yoga you might have heard of, including Vinyasa, Hatha, Iiyengar, Bikram, Ashtanga, and restorative, just to name a few. When it comes to picking the "right" yoga class, I say give them all a try because each of them is unique. Some involve lots of moving, some involve lots of deep stretching, some involve heat, and some even involve the use of nature and animals. The whole concept of yoga is to breathe and relax the mind. If you take a class that does not bring out those feelings in you, don't give up! Try that format a couple of times and see whether it is enjoyable. If it's not, research what you are looking to get out of your class and try one that offers that.

Yoga means so many things to me. I began my yoga journey in 2009 to relax during a tough family situation. I was in love with the way it made me feel, and every week I looked forward to my Sunday night time on my mat. In 2011, my mom’s medical condition worsened and I began going to yoga 3 to 4 times a week. In 2014, I decided I was so impressed with the way it changed my mindset that I wanted to become certified, so I spent 3 months intensively training to get my 200 hour yoga certification. My yoga journey has a lot more depth, but that was the beginning. I never knew cancer would lead me to a career path of success and happiness, which is ultimately living a daily life of yoga.

Yoga is a growing class at NIFS. With a wide variety of instructors, you won’t find your standard “gym yoga.” All of the NIFS yoga instructors are 200 hour or more certified. You might take a class with a “flow” to it, be in a class with a more restorative approach, or even see that Yoga for Athletes is offered for those who want a strength-based yoga class. Check the Group Fitness Schedule for classes and times.

This blog was written by Brittany Ignas, BS in Kinesiology, 200 Hour Yoga Alliance Certified, Stott Pilates Certified, and Fitness Coordinator. To find out more about the NIFS bloggers, click here.