How Getting Outdoors Helps Your Well-Being 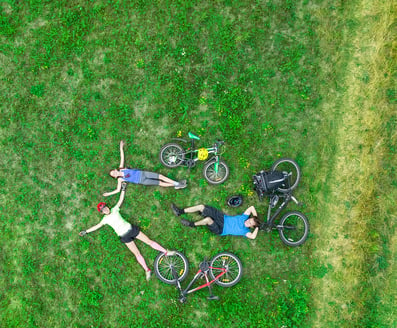 Growing up and continuing to live in the Midwest, I’ve grown to appreciate the summer months more and more. In fact, in Michigan we joke that there are really only two seasons:

Long story short? When it’s nice enough to not have to wear a parka to brave the outdoors, you best believe I’m outside on a bike ride, relaxing by a lake, or unplugging on a hike in the woods during my down time.

Recharging Your Batteries with Nature

I’ve always felt like this has helped me recharge my batteries, anecdotally at least. But now, more and more research is mounting to support the idea that simply being in nature has numerous benefits to health and well-being. For example, a meta-analysis completed by Jones & Twohig-Bennett (2018) found statistically significant decreases in diastolic blood pressure, incidence of diabetes, and salivary cortisol (hello decreases in stress), while also reducing the risk of cardiovascular disease and improving life expectancy and mental health. Not too shabby, right?

Spend Two Hours or More Outside Each Week

But how much time do you need to spend in nature to reap the rewards for health and well-being? It looks like current research is supporting the 120-minute threshold per week.

White et al. (2019) examined results from the Monitor of Engagement with the Natural Environment Survey in England, which included 20,000 people over a three-year span. They found that those who reported being in nature for two hours or more during the week were overall healthier and had a greater sense of well-being compared to those who did not get outside at all. Spending 60 to 90 minutes came with some improvements, but it was not as significant an effect as two hours. And over 5 hours per week had no additional benefits. What’s more, these results rang true across all demographics examined in the study: age, gender, ethnicity, socioeconomic status, proximity to nature—all exhibited improvements to health and well-being at the two-hour mark.

So, the moral of the story? While the exact mechanism remains unknown, making time in your schedule to get outside in some way, shape, or form for two hours a week (in ANY increments of time) can not only help you mentally recharge, but also significantly improve your health and well-being going forward.

For some tips on exercising outdoors safely in the summer, check out this blog.