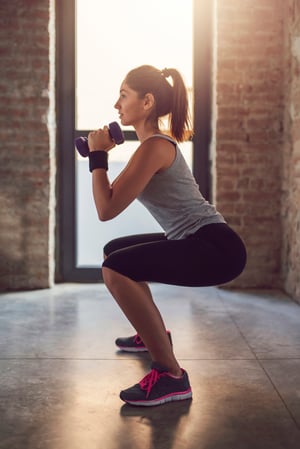 For whatever reason, there seems to be this notion in the fitness industry that if the workout doesn’t leave you on the ground gasping for air, it really wasn’t a good one. Or maybe that you didn’t work hard enough because you didn’t go running to the nearest trash can by the end. This could not be further from the truth; but unfortunately this way of thinking still seems to run rampant.

Not Every Workout Has to Be a Gut-Buster

One of my favorite quotes when it comes to strength and conditioning comes from Yuri Verkhoshansky, Russian professor, coach, and author who is credited as being the father of plyometrics. He suggests that “any idiot can make another idiot tired.” Now, I’m not calling anyone out. But this brings up a fantastic and often forgotten premise: that we should not judge the quality of a training session simply by how exhausted we feel.

Yes, we should challenge ourselves. Yes, there should be times when a workout feels more difficult. But here’s the key: not every workout should feel like a gut-busting knock-down, drag-out fight to the finish. If it does, it might be time to reevaluate.

Our bodies rely on three energy systems to get us through everything from a tough workout session to washing the dishes, as well as basic organ function around the clock. They are all operating in some capacity all of the time, just in varying degrees based on the activity we’re doing. It’s not like a light switch, just on/off. Here are our players:

Now, this isn’t intended to be a full-blown Bill Nye-esque science lesson. But I do want to focus on one of those energy systems for just a moment because it plays a massive role in how we are able to recover from task to task. And that is the aerobic system. It has the capacity to produce a great deal of energy, ATP—our body’s form of energy currency. The only problem is that is takes a little while longer to do compared to the other two. As a result, the aerobic system is responsible for replenishing and producing energy during rest periods or downtime between bouts of high-intensity exercise.

Much like any facet of fitness, this system can be trained directly. It typically comes in the form of slightly lower-intensity exercise (examples to come in a future post). So, while the exercise session might not feel like a back-breaker, the benefits that arise from it can come back twofold when looking at future training sessions. Essentially, what you’re doing when you are working on bolstering your aerobic system is building a bigger, more efficient engine.

Reap the Benefits of Faster Recovery

So, those high-intensity classes you take a couple times per week? Think about being able to sustain the same power and strength from round to round because you can recover more effectively during your rest periods. Or maybe you like to hop under the bar for some strength training in the form of squat or bench press. Well imagine being able to hit more of those heavy singles because you recover more proficiently between sets. That’s when the aerobic system really kicks into high gear: during rest. Yes, it is always contributing to some degree when it comes to ATP production (remember energy currency?). But its benefits really come to light during the downtime.

Building your fitness profile really requires a 360-degree approach. Some sessions may focus on strength. Some sessions may focus on high-intensity training. And some should take the time to address the aerobic system. Not only do they provide the body some much-needed recovery time; these sessions can also allow you to get more out of those strength and high-intensity workouts as well.

Next time, I’ll cover specific examples of how you can train your aerobic system. Until then, stay strong, my friends!