Powerlifting or Lifting for Power? 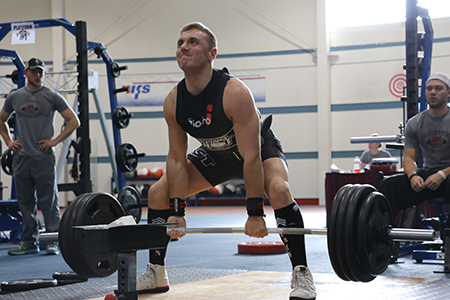 Pre COVID, NIFS held their Annual Powerlifting Competition, putting some of the strongest individuals in the building on display. Members and nonmembers alike, come together to celebrate strength and fitness by performing three lifts with the hopes of reaching the highest total weight possible. The three lifts performed are the squat, bench press, and deadlift. Each competitor performs very well and the hard work they put in until competition day is evident.

But what is powerlifting? Sure, the deadlift, bench press, and squat give you an idea of what you do, but what is the true makeup? With all of the different varieties of resistance training and weightlifting around, powerlifting is sometimes a term that leaves people confused. Are you powerlifting or are you training for power?

If you are training for power, more than likely you are using explosive exercises that require a high degree of speed to complete. In a physics sense, power equals work divided by time. This means that a speed element is vital in the production of power. Olympic lifting utilizes this notion. The hang clean, power clean, snatch, and others require a high bar speed in order to develop the maximum amount of “power” possible. Without speed, the chances of success during these lifts are not as high.

If you compare the lifts that were performed during our powerlifting meet to the aforementioned Olympic lifts, the difference is obvious. The deadlifts, squats, and bench presses that were performed during our meet were not fast. In fact, the majority of them were slow. As long as the lift was completed with the proper form, it was a success. Speed did not play a role in the success or failure of each of those three lifts.

Although powerlifting does leave some a little confused about its definition, there is no doubt that the individuals who participate in them do possess the ability to generate a high amount of power. For these specific events, though, speed does not matter.

So the next time you set up your squat rack or load your bar for the deadlift, think: are you powerlifting, or are you training for power?

For more about the benefits of powerlifting, see this blog.