Powerbuilding: The Middle Ground Between Powerlifting and Bodybuilding 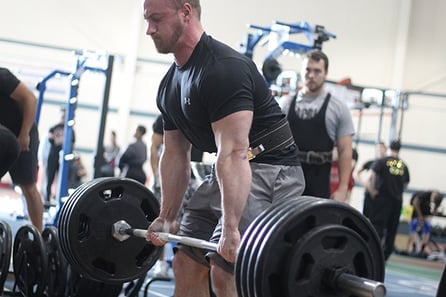 Over the last couple of years, I’ve noticed an increasing trend in bodybuilders and physique athletes migrating toward the sport of powerlifting. I’m no exception. I spent the first eight or so years of my lifting career focused almost exclusively on bodybuilding. Eventually, however, I got tired of the culture, the subjective judging criteria, and the politics involved in the sport. I decided that I’d rather be strong and functional rather than just big and muscular. Over the next couple of years, I began focusing more and more on strength-specific training. Eventually, this led me to my first NIFS Powerlifting Competition back in 2016.

How Are Bodybuilding and Powerlifting Different?

In case you’re wondering how the two sports differ, I’ll go ahead and give a brief overview of each of them. Bodybuilding is a sport that emphasizes muscle size, shape, symmetry, and definition. Competitors train specifically with the goal of inducing hypertrophy in their muscles. Much like a sculptor, they sculpt their own bodies with these specific goals in mind. On the competitive side of things, there’s absolutely zero emphasis on physical performance. It doesn’t matter how much weight you can lift, but rather, it matters how much weight you look like you can lift. The judges make their decisions based on the aforementioned criteria, of course, coupled with their own subjective bias.

Powerlifting, on the other hand, is sport in which athletes are ranked according to their combined strength on three specific barbell movements. They compete in a max squat, bench press, and deadlift. The total amount of weight lifted is added up and then usually a strength-to-weight ratio is calculated using what is called, the Wilks Coefficient.

The Rise of Powerbuilding

Powerbuilding has emerged as a sort of hybridization of the two sports. Bodybuilding and powerlifting each have their own respective training styles and dietary practices that ultimately lend themselves to the specific outcomes of maximizing strength or maximizing hypertrophy. Thus, powerbuilders are essentially bodybuilders who have decided that they want to be as strong as possible, or they are powerlifters who have decided to prioritize aesthetics as well as strength.

To the layperson, it would seem like these two goals should go hand in hand. I mean, it makes sense that a strong person would have big muscles, and a person with big muscles would be strong. Technically, this is true to some degree. Early on, hypertrophy will be the most predominant adaptation seen in response to any resistance training program. In accordance with the principle of “general adaptation syndrome,” as the muscle becomes more adapted to the presented stimulus, it will require greater intensities and more specific overloads to elicit a response. This is where the principle of specificity comes in to play.

According to the American College of Sports Medicine (ACSM), to most efficiently train for strength, a person should perform 1–3 sets of 8–12 repetitions using a load that is 60–70% of their one-rep maximum (1RM) for novice to intermediate lifters; and 2–6 sets of 1–8 repetitions at 80–100% of their 1RM for advanced lifters.

The recommended rest periods range from 2–3 minutes when working at higher intensities to 1–2 minutes when using lighter loads. In some training programs you might even see rest periods of 3–5 minutes between sets to allow for optimal recovery and performance on each set.

As you can see from the above guidelines, the type of training required to maximize muscle size is different than the type of training to maximize muscle strength. According to a meta-analysis performed by Dr. Brad Schoenfeld in 2016, most of the research has demonstrated that there is a direct correlation between hypertrophy and volume (total sets and reps performed). Since strength-specific training usually consists of training with lower volume at higher intensities, it stands to reason that it is less hypertrophic overall. Even though there is a fair amount of overlap between the two training styles, optimizing muscle size ultimately means sacrificing some muscle strength. The same could be said about strength training. In order to train at higher intensities, the volume must be reduced to avoid injury and overuse.

So what does this all mean? Powerbuilding is a tradeoff of sorts. This is especially true when reaching beyond the levels of basic strength and fitness. Initially, the body will react to any sort of resistance training by developing larger and stronger muscles. When that adaptation stops, it starts to become a matter of prioritization. One must choose where they’d rather go. The same could be said about distance running and bodybuilding, or perhaps rock climbing and powerlifting. You can be moderately proficient at both endeavors, but in order to really excel at either, you’ll have to sacrifice the other.

This blog was written by Davin Greenwell, ACSM Certified Personal Trainer and Health Fitness Instructor. To find out more about the NIFS bloggers, click here.