Productivity Hacks: Action vs. Motion—Be Productive Rather Than Busy 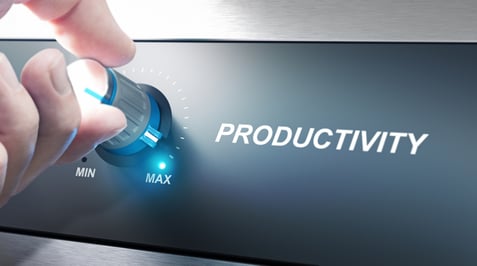 How many times have you looked back at a day and thought, “Man, I wish I would’ve been more productive,” while your to-do list seems to grow and grow. Or maybe you feel like you were crossing a lot of things off the list, but no meaningful work was actually accomplished? In my experience, it’s almost a weekly occurrence. I feel like I’m flying around at work, checking off boxes. But then I get to the end of my day, scan back through, and realize that I didn’t actually work on any of the big jobs that I had originally intended. Its days like these that made me want to begin a blog series that attacks the idea of productivity: what it actually is, where our pitfalls lie, and how we can improve on it to get more out of each day.

So What Is Productivity?

In the words of the eloquent Julie Andrews, let’s start at the very beginning, a very good place to start. What the heck is productivity? We throw around the term all the time. But what it actually entails is the efficiency a person has when it comes to completing a task. It actually has nothing to do with how many tasks you get done in a day. And I think that’s where many of us miss the boat a little bit. We get so caught up in the trap of being in motion and thinking that we’re being productive as a result. Being busy is not being productive. If anything, sometimes it detracts from it. And I get it; sometimes our jobs require little tasks like answering emails, structuring your schedule, and other daily logistical to-do’s. But they shouldn’t be the things taking up the bulk of your working hours.

This leads into the concept of taking action versus just being in motion. Taking action is the direct line to achieving a result. Sometimes in the biz, we can even describe this as a process goal. It’s a physical step you’re taking toward accomplishing a task or goal. For example, if you need to write a report for work (or in my case, write this post), an action would be to physically sit down and start hammering out the intro—put pen to paper. With that same example, being in motion would look more like reading various articles, doing excessive research because you feel you’re not ready to start, or maybe even doing something completely unrelated like immediately checking emails when you sit down in your office.

This same concept of action versus motion can be seen outside of work in goal setting, too. Let’s say you want to make weightlifting part of your exercise routine. You want to get stronger and healthier, and maybe even train for a powerlifting meet! Being in motion would be to start reading books about training, reading articles written by coaches, or setting up a physical meeting with a coach to talk about where to start. Now, some of these are steps that can absolutely be taken along the way to being productive in the form of starting a resistance training plan. But that’s the thing; they shouldn’t be the only thing you’re doing. Sooner or later, you’ll need to jump in, take action, and start lifting. Getting too preoccupied in the planning stages, waiting until you feel ready, often stalls you to the point of not actually starting in the first place. Sometimes you’ll never truly feel ready. But that doesn’t mean you shouldn’t start. Don’t delay; choose action over motion when push comes to shove.

How You Can Take Action Now

Here are some tips for getting started.

So whether it’s a task on the docket at work, or a personal goal you have set for yourself, you can start to become aware of when you’re stuck in the endless loop of motion. For some projects, especially bigger ones, there will be necessary checkpoints and planning along the way that would be considered motion. But don’t let that take over and be the only thing that’s happening. Take action. Get started. And in the words of legendary basketball coach John Wooden, “Never mistake activity for achievement.”

Be on the lookout for the next installment of the productivity series where I’ll tackle the topic of the Ivy Lee Method: how to set yourself up for success the following day!