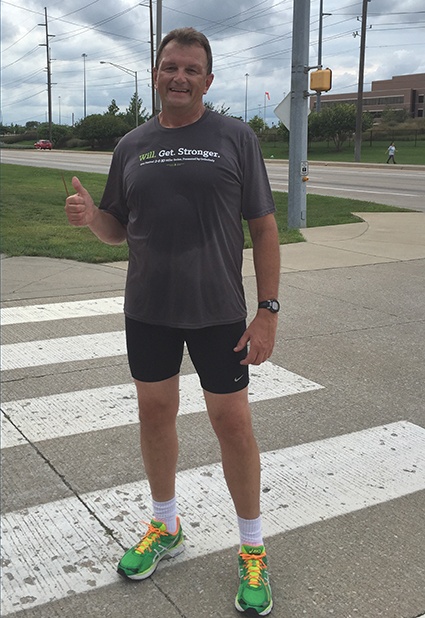 I wanted to take some time to highlight NIFS member Jack Taylor. I have gotten to know Jack through the fall Half and Full Marathon Training Program. (He is training to run the Monumental Half Marathon, which will take place on November 3rd here in Indianapolis.) He has a pretty cool story, which he shares with us here.

How did you initially get started with running?

I learned early in high school that I was more of a distance runner than a sprinter. While in the military, I identified running as one of my strong suits. During college I found that running casually was challenging, effective, and relatively inexpensive. I was in the Army/National Guard for 25+ years. Running helped me maintain a necessary level of fitness for whatever I was involved in.

What is your story? Tell me a little bit about yourself and your health story.

I had participated for about 13 years with Ken Long and Associates’ spring Bricks To Bricks Mini-Marathon Training Program, as well as Ken’s Fall Half-Full Marathon training programs. Tom Hathaway was the longtime and beloved coach. In spring 2009 I had ran one of my more respectable mini-marathons. By the next year, I felt like I was in the same degree of fitness, but my time had fallen by about 15 minutes. I couldn’t really explain it.

By that fall, I had been experiencing a variety of minor ailments, such as plantar fasciitis, peculiar twitching in my legs, and other nerve pains and sensations. Near the end of the Monumental Half Marathon the muscle in my right leg began twitching and contracting violently. I did finish the race. I subsequently saw several sports physicians and specialists with the Franciscan St. Francis Health Network. I was treated for plantar fasciitis, bone spurs, arthritis, etc. I had CT scans, MRIs, and many X-rays.

At one point I was told by my sports physician that I was doing great and could return to running after some physical therapy. By that time, the twitching in my legs continued, and I noticed that I progressively could not lift my leg quite as high as normal. The inability to lift my leg gradually got worse. One specialist told me that I must have a weak hip flexor, but I was somewhat skeptical. I completed the physical therapy and began running again.

Not long after, I noticed while running gingerly trying to increase my stamina and mileage that every so often, I would uncontrollably drag the toe of one foot; I had no ability to control it. One day, in the spring of 2011 at the finish of a three-mile run, I dragged the toe again and fell suddenly flat on my face, badly bruising my nose and both eyes. At that point I knew I had to do something else, so I went back to my primary physician in another health network and basically started all over again.

For the next several months I went through more and more tests, and my balance and physical stability got progressively worse, which led to many frequent falls. The symptoms were very similar to neuropathy, such as damage to nerves in my feet and legs and difficulty controlling bodily functions. I began to experience symptoms of paralysis in my left leg as well. This got progressively worse until I had to walk with a quad-cane—basically dragging my left leg and foot as I went along my way. I had to manually lift my left leg with my hands to negotiate curbs or steps. I also experienced general muscle weakness in different parts of my body to varying degrees.

It wasn’t until late 2011 that the neurologist had ruled nearly everything else out and was able to order an MRI of the thoracic region of my back. That was the ticket. It was evident right away that I had a large tumor on my spinal cord inside the vertebrate. The tumor was the size of a lime. The tumor was crushing my spinal cord flat, and my doctor advised that the tumor had likely been growing for 10 to 15 years.

I had surgery to remove the tumor in January 2012 and had to undergo weeks of inpatient physical and occupational therapy as well as continued outpatient surgery. The neurosurgeon advised that I might never recover from all the nerve damage, and I would be lucky to walk normally ever again. While he said it was possible, he didn’t give me a lot of encouragement about running again.

I’ve been working to regain my strength and balance in all aspects. I didn’t start running a lot until I joined the NIFS mini-marathon training program in 2014. Because I wasn’t very confident about how I would progress, I didn’t even consider running the mini-marathon in 2014 because I didn’t have a clue how my progress would transpire in the training program. I did finish the program and completed the group 12-mile run. It doesn’t seem like a big deal now, but it was at that time for me.

How many half and full marathons have you completed?

And what inspires you to keep running?

While it is a lot harder than when I was younger, it helps me maintain an acceptable weight level while allowing me to eat most of what I like.

Thanks for taking the time to meet Jack! What a great story and an inspiration to keep going. Good luck in your next race, Jack!

Cross the finish line with us this Spring! The 29th Annual Mini Marathon & 5K Training Program starts January 23–May 8, 2019. Training is at 6pm at NIFS downtown. Register today online!

This blog was written by Amanda Bireline, Fitness Center Manager. To find out more about the NIFS bloggers, click here.