When we last left Alice (aka you), we provided her with two kinetic chains to rescue her from the mythical land of functional training. Now that I have established a solid base to build from, I can hone in on what actually makes moving functional, and that is movement. (I know, shocking isn’t it?)

The Patterns of Human Movement 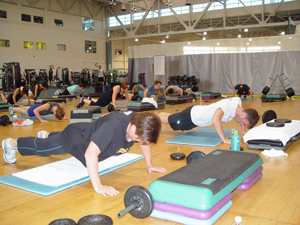 Basic human movement is pretty much divided into seven different patterns. As stated in Part 1,
these patterns can affect one another and be built onto one another. The seven movement patterns are the following:

Taking the definition of functional training discussed earlier (to train or restore function in movement), these are the movements I was referring to. Functional training should revolve around making these basic movement patterns better. That’s it, end of story? There are many aspects that can go into a functional movement program such as heavy strength training, metabolic acceleration work, core stability, and much more. But the program’s components should always point back to restoring and training the function of these patterns.

When programming a strength-training workout, to train or restore function in movement, I like to pair movements together. This will add to the training effect and save you time as well. There are a number of ways to pair these basic movements together. Keep in mind two things when pairing up movement: the kinetic chains being trained, and the residual fatigue of staying on one side (or chain) of the body. Simply put, don’t pair movements that occur on the same side of the body.

Here are some of my favorites:

If you were to complete these movements I listed for 10 reps each and for 3 sets with moderate to heavy weight (while keeping proper movement mechanics), you would have yourself a well- founded functional training workout. If you forget everything I have told you, just remember this:

Do something for the legs, do one push, one pull, and a core exercise!

So there you have it, the dirty on functional training. Please keep in mind that I have only scratched the surface of this topic. I can’t stress enough the importance of knowing how you are currently moving so you can have the best plan of attack in your training.

Schedule a Functional Movement Screen with us today and know the metrics that matter.